Problems with chapter images and links?

I don’t understand why, after all the rants in “Freakshow”, your own Player seems to not support embedded chapters in the mp3 file. Also, there seems to be no support for metadata associated with chapters such as images and links.

I am using Forecast (https://overcast.fm/forecast) to embed chapters and images and that seems to work in almost all iOS players including Apple Podcast app.

Specific issues I encountered with Podlove Webplayer regarding chapters:

Is there a json example file how to embed chapter images?

I am looking for a way to make Podlove Webplayer behave like Apple Podcasts, Overcast and Pocketcast. It should display the images and links I associated with each chapter. I want the main image that is displayed in the player to change when the user changes the chapter. I want the chapter title with possible interactive link to appear under the image, like in Overcast.

Am I just doing something wrong?

PS: It would be helpful to include a .json example file here: https://docs.podlove.org/podlove-web-player/config.html to help users who are not familiar with the format.

I found a solution myself: The json file can contain image and href fields for each chapter with urls. Those urls are indeed used by the player and displayed.

It is tedious, but it works. Still it would be much nicer if the player could just read the mp3 embedded information.

A small gripe remains: non-square images are not centered like in the Apple Podcast app. This looks quite hideous. Also the frame around the image is ugly: 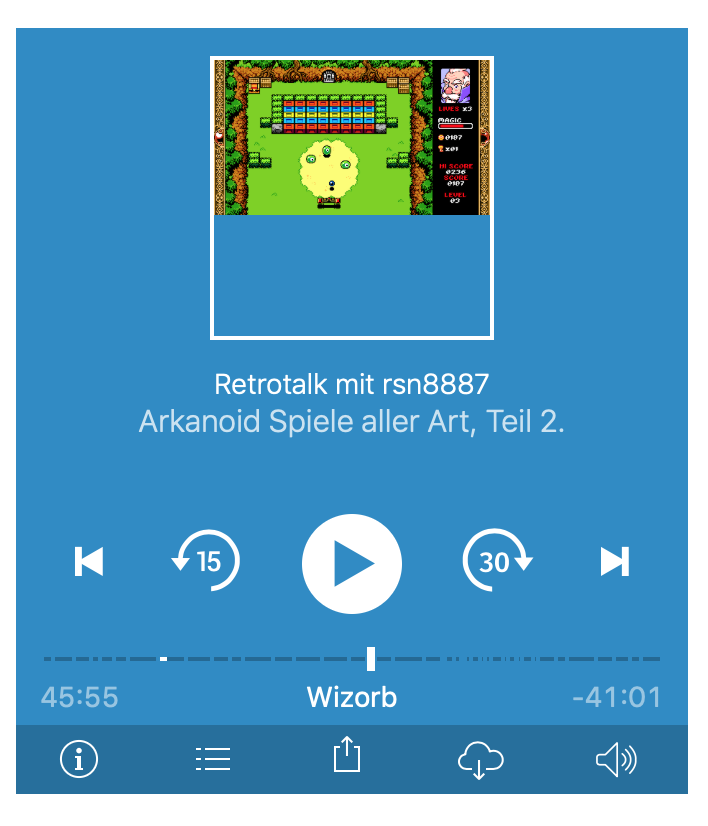 The Apple Podcast app looks much nicer when displaying chapter images. There, a shadow is placed around the image instead of the frame:

In Overcast, the image is simply centered without a frame which also looks quite nice:

It is tedious, but it works. Still it would be much nicer if the player could just read the mp3 embedded information.

The reason is quite simple. Parsing chapters from the media file requires to download the file. That has drawbacks for the users bandwidth, it messes with the analytics and finally also would require a mp3 file embedded, even if there are modern formats like m4a or ogg available.

PS: It would be helpful to include a .json example file here: https://docs.podlove.org/podlove-web-player/config.html to help users who are not familiar with the format. 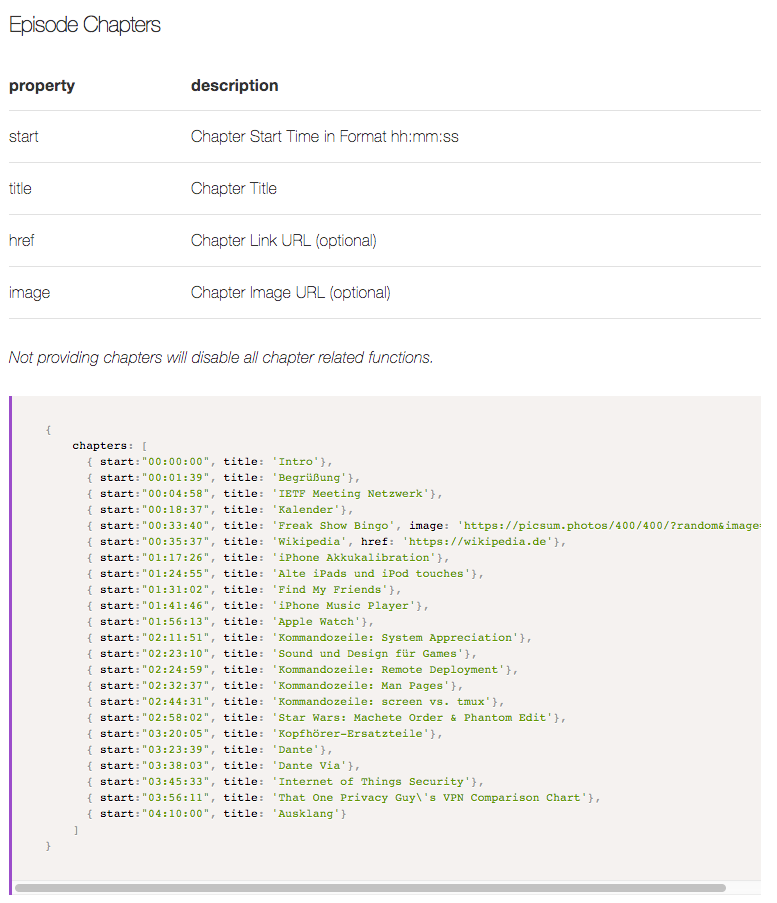 The format is already described. If you want to have a more interactive way to play with the configuration please have a look at https://docs.podlove.org/podlove-web-player/playground.html

A small gripe remains: non-square images are not centered like in the Apple Podcast app. This looks quite hideous. Also the frame around the image is ugly:

Non square images are very rare for podcast images. I will happily adapt the image rendering if you could provide me an example.

Yes you are right. It all works great now apart from the image centering.

Here’s the example (go forward to 45:55 in the web player for example):
https://retrotalk.coolatoms.org/retrotalk_006/

Concerning the examples in the docs: the image you posted doesn’t show a valid .json file afaik, but it works as an argument in JavaScript. The default contents of the playground textbox are valid .json, with quotation marks in the right places. It would help a lot if you provide a valid .json example when it is first mentioned that a path to a .json is accepted as argument when invoking Podlove Webplayer.

Edit: here on this doc page, topic “Embedding,” is where I would expect a verbatim listing with contents of the json file, in addition to the meta-object example. And both examples should include chapter images and href links:
https://docs.podlove.org/podlove-web-player/embedding.html

I found another small issue. When one of the chapter images is not found, then all following chapter images are not displayed either. It might be better to fall back to the poster image and gracefully recover from such a situation.